Quickies: Strangers in a Pool 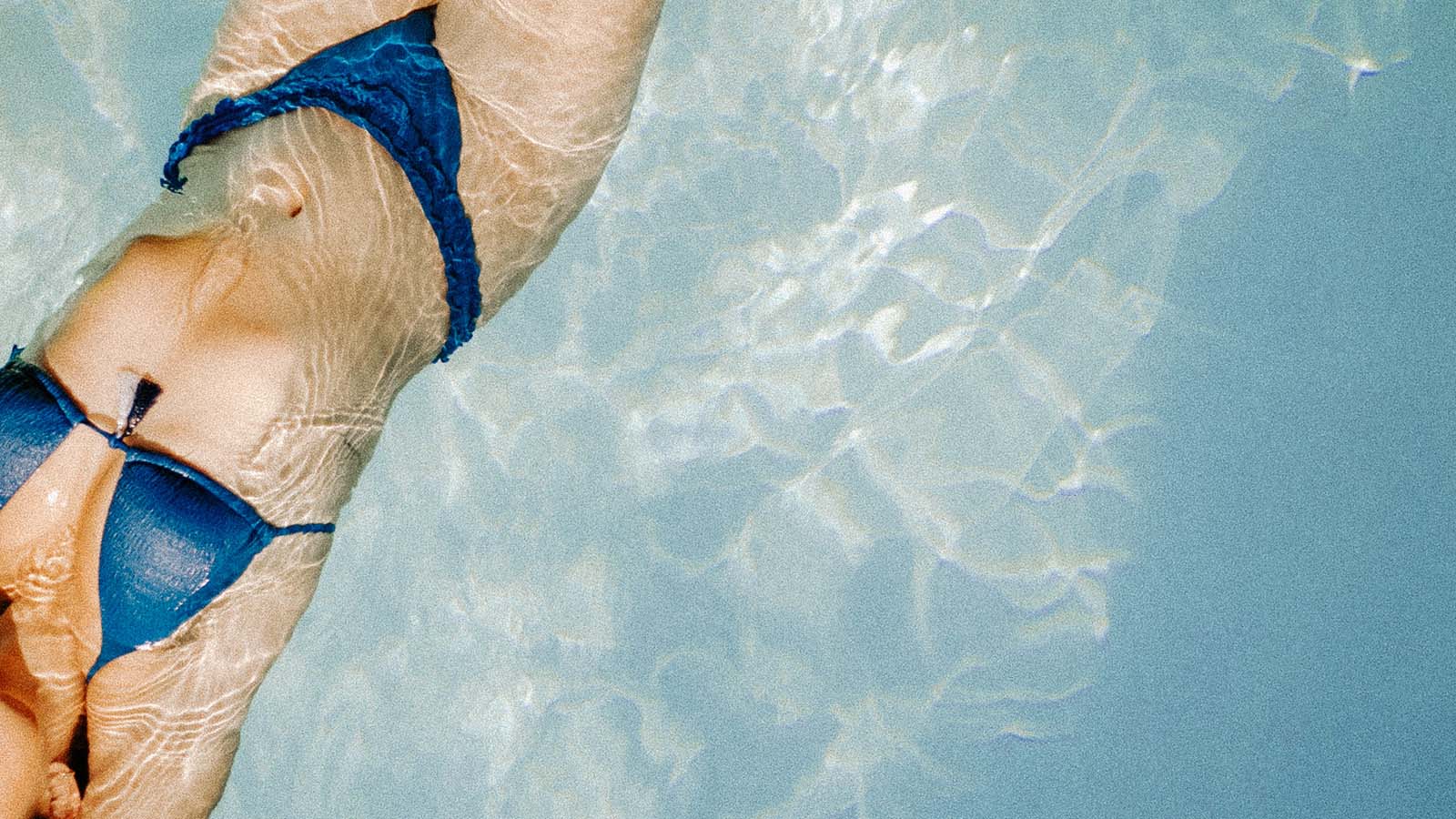 I grabbed a towel and made sure I had the card key to my motel room, then I headed out the door to the pool.

It was about 2 pm and I had a break in the middle of my day, so I figured a quick swim was in order. My company had sent me out here to assist one of the small organizations we worked with and I was due back there at 3:30 pm.

The motel I was staying in was not shitty or shady, just basic, but around here this was pretty much my option. I mean, I could have chosen a couple of other motels that were basically the same thing. This one did have a nice pool, however.

It was hot without being sweltering, and as I opened the gate to the pool area and passed the sign that said, “No lifeguard on duty. Swim at your own risk,” I saw there was one other guest here, a man, who was just getting out of the pool.

As I got closer to him, I saw that his swim trunks were saturated with enough water that they stuck right to him, and I’m pretty sure I got a nice outline of his cock. I couldn’t help but wonder what it would feel like inside my pussy. When I walked past him, we made eye contact and exchanged quick smiles. He was cute.

I’d say he was about my age, around thirty, and he had a really short haircut with a toned, but somewhat slim-framed, body. He wasn’t real tall—I’d guess about 5’9.

I threw my towel onto a lounge chair, then took off my shorts and t-shirt. I could already hear the anxious voice of the woman I had been working with this morning—Oh, Blake, I’m so glad you’re back…—and was glad I had a little time before I needed to return.

It had been a long day. After returning to my work site at 3:30, I was there until 8 pm. Then I made the short drive back to my motel room, ordered some dinner, and stretched out on the bed to watch TV. When my food arrived I ate and then I laid around a while feeling a little sleepy, but not wanting to go to sleep.

Glancing at the clock, I saw it was 9:27 pm and I was pretty sure the pool closed at 10 pm. If I hurried I could get out for another quick swim.

This time when I opened the gate to the pool area, I was surprised to see someone else there. And I was even more surprised when I realized that it was the guy from earlier this afternoon.

He was slowly swimming laps the length of the pool and didn’t see me. I dropped my clothes and towel off on a chair and lowered myself into the water, resting my arms on the edge of the pool behind me and kicking my feet lazily in front of me. I watched him.

The more minutes went by, the hornier I got, the fantasy of fucking him sticking in my mind. He was pretty engrossed in his swimming, but I think he caught a glimpse of me on one of his laps while turning his head to breathe. It was then that I got an idea.

Looking all around me for signs of other people, I began to untie my bikini top. It was dark out and there weren’t a whole lot of lights around the pool, so that was helpful. I pulled it off and laid it on the pool deck behind me, wading bare-breasted in the water now.

I figured if anyone else saw my tits I’d be gone tomorrow, so it was no big deal.

Finally, he stopped swimming. Standing up in the shallow water he wiped his face with his hands, then looked around and his gaze stopped. On me.

He stared for a few moments, then I was pretty sure I could see him lick his lips. “It sure is.”

The man swam over. Beside me, he seemed a little unsure, so I made sure to be very clear.

He placed a hand on one breast and his mouth on the other, sucking the nipple then licking me all over. His other hand went inside my bikini bottoms and right to my slick pussy, rubbing and stroking my clit.

I reached out for his cock over his swim trunks, grabbing and pulling on his hard length. Groping, kissing, and licking, we stimulated each other for a few minutes before he stopped to pull down his trunks, freeing his cock. In the dim light, I couldn’t see it well.

Grabbing onto both of my tits, and alternating sucking on each nipple, I stroked his cock underwater, which I could now feel all of.

Looking around quickly to make sure we hadn’t been spotted, I realized that this was going to need to be fast, and like he had read my mind, I felt him pulling aside the fabric of my bikini bottom crotch.

A moment later he shoved his entire cock into my pussy.

Stretching and filling me, I groaned and he groaned too, and then he began pumping fast and hard, a hand squeezing one of my tits and the other one squeezing my ass.

Reaching my hand between my legs, I rubbed my clit while he pounded me and was getting closer and closer to coming.

“Fuck… Yeah, fuck that pussy… fuck that wet pussy…” I whispered while he gave me hard thrusts against the pool wall.

Rubbing my clit as fast as I could, I moaned repeatedly as quietly as I could, just moments away from climax.

And everything released. My hips jerked, my legs shook and my pussy squeezed his cock, and then he began to moan too and really drilled me with his cock, his arms wrapped tightly around me.

A moment later, he exploded in my pussy.

Groaning, he thrust deep as he emptied himself into my body, filling me with his thick load. A few moments later, he stopped, breathing hard but still holding on to me.

He stepped back and pulled his shorts back up and I put my bikini top back on. I was just about to thank him for the great fun when a man’s voice called out from the gate.

“Folks, we’re closing up the pool in a few minutes.”

“Okay, thanks,” I called out, and a jolt of adrenaline ran through my body.

My stranger and I made eye contact and chuckled, and he began moving away from me.

“Good night,” he said, a little spark in his eyes.

“Good night,” I said, and turned around to lift myself out of the pool.

Photo by Jessie Shaw on Unsplash